This document is intended for those who wish to participate in the Lido protocol as Node Operators — entities who run Beacon validator nodes on behalf of the protocol and receive fee in return. It consists of two sections: General overview and Operations HOWTO. If you’re here for the technical details of interacting with the protocol, feel free to skip to the latter.

Node Operators manage a secure and stable infrastructure for running Beacon validator clients for the benefit of the protocol. They’re professional staking providers who can ensure the safety of funds belonging to the protocol users and correctness of validator operations.

The general flow is the following:

The fee is taken as a percentage from Beacon chain rewards at the moment the Oracles report those rewards. Oracles do that once in a while — the exact period is decided by the DAO members via the voting process.

The total fee percentage, as well as the percentage that goes to all Node Operators, is also decided by the DAO voting and can be changed during the lifetime of the DAO. The Node Operators’ part of the fee is distributed between the active Node Operators proportionally to the number of validators that each Node Operator runs.

For example, if Oracles report that the protocol has received 10 Ether as a reward, the fee percentage that goes to Operators is 10%, and there are two active Node Operators, running 2 and 8 validators, respectively, then the first operator will receive 0.2 stETH, the second — 0.8 stETH.

The fee is nominated in stETH, a liquid version of ETH2 token introduced by the Lido protocol. The tokens correspond 1:1 to the Ether that the token holder would be able get by burning their stETH if transfers were already enabled in the Beacon chain. At any time point, the total amount of stETH tokens is equal to the total amount of Ether controlled by the protocol on both ETH1 and ETH2 sides.

When a user submits Ether to the pool, they get the same amount of freshly-minted stETH tokens. When reward is received on the ETH2 side, each stETH holder’s balance increases by the same percentage that the total amount of protocol-controlled Ether has increased, corrected for the protocol fee which is taken by minting new stETH tokens to the fee recipients.

For example, if the reward has increased the total amount of protocol-controlled Ether by 10%, and the total protocol fee percentage is 10%, then each token holder’s balance will grow by approximately 9.09%, and 10% of the reward will be forwarded to the treasury, insurance fund and Node Operators.

One side effect of this is that you, as a Node Operator, will continue receiving the percentage of protocol rewards even after you stop actively validating, if you chose to hold stETH received as a fee.

Becoming a Lido Node Operator involves several steps, all of which are detailed below.

Expressing interest to the DAO holders​

To include a Node Operator to the protocol, DAO holders must perform a voting. A Node Operator is defined by an address that is used for two purposes:

Pass this address to the DAO holders along with the other relevant information.

Upon inclusion into the protocol, a Node Operator should generate and submit a set of BLS12-381 public keys that will be used by the protocol for making Beacon deposits. Along with the keys, a Node Operator submits a set of the corresponding signatures as defined in the spec. The DepositMessage used for generating the signature must be the following:

The fork version used for generating the signature must correspond to the fork version of the Beacon chain the instance of Lido protocol is targeted to.

Use the latest release of staking-deposit-cli.

Here, chain is one of the public Beacon chain names (run the command with the --help flag to see the possible values: ./deposit new-mnemonic --help) and eth1_withdrawal_address is the withdrawal address from the protocol documentation.

As a result of running this, the validator_keys directory will be created in the current working directory. It will contain a deposit data file named deposit-data-*.json and a number of private key stores named keystore-*.json, the latter encrypted with the password you were asked for when running the command.

If you chose to use the UI for submitting the keys, you’ll need to pass the JSON data found in the deposit data file to the protocol (see the next section). If you wish, you can remove any other fields except pubkey and signature from the array items.

Never share the generated mnemonic and your private keys with anyone, including the protocol members and DAO holders.

Please, make sure to check the keys validity before submitting them on-chain.

Lido submitter has validation functionality built-in, keys will be checked before submitting.

If you will be submitting keys manually via Lido contract, you can use Lido CLI. It's a Python package which you can install with pip:

You would need an RPC endpoint - a local node / RPC provider (eg Alchemy/Infura).

After generating the keys, a Node Operator submits them to the protocol. To do this, they send a transaction from the Node Operator’s withdrawal address to the NodeOperatorsRegistry contract instance, calling addSigningKeysOperatorBH function and with the following arguments:

Etherscan pages for the Görli/Prater contracts:

Etherscan pages for the Mainnet contracts: 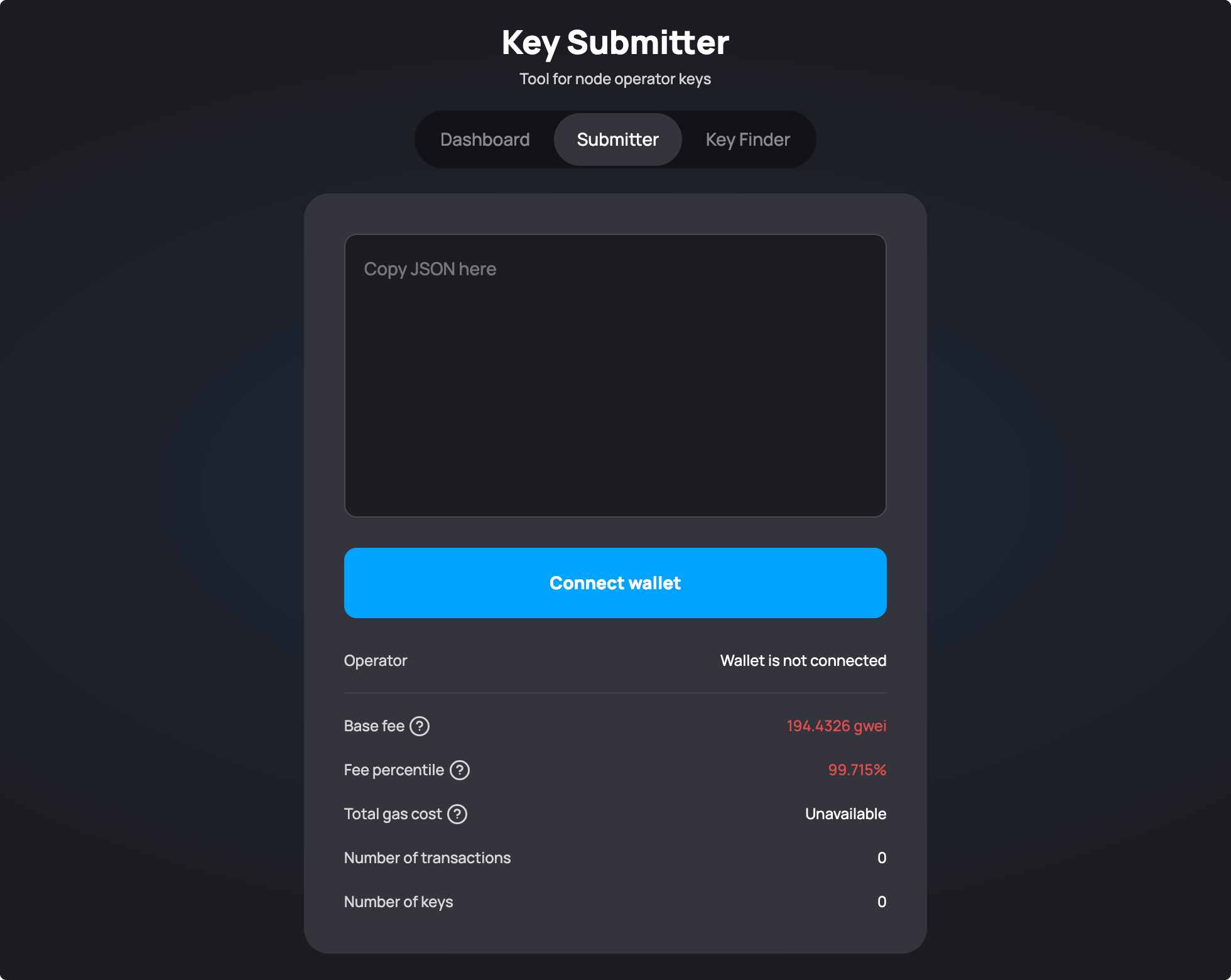 If you’ve used the staking-deposit-cli, you can paste the content of the generated deposit-data-*.json file as-is.

Else, prepare a JSON data of the following structure and paste it to the textarea that will appear in the center of the screen:

This tool will automatically split the keys into chunks and submit the transactions to your wallet for approval. Transactions will come one by one for signing. Unfortunately, we cannot send a large number of keys in a single transaction. Right now, the chunk size is 50 keys, it's close to the limit of gas per block.

We now support the following connectors:

If you want to use Gnosis, there are two ways to connect:

When you submit a form, the keys are saved in your browser. This tool checks the new key submits against the previously saved list to avoid duplication. Therefore it is important to use one browser for submitting.

Importing the keys to a Lighthouse validator client​

If you’ve used the forked staking-deposit-cli to generate the keys, you can import them to a Lighthouse validator client by running this command:

Checking the keys of all Lido Node Operators​

Never vote for increasing the key limits of Node Operators before verifying new keys are present and valid.

Make sure Python with pip is installed and then run:

This operation checks all Lido keys for validity. This is a CPU-intensive process, for example, a modern desktop with 6 cores, 12 threads and great cooling processes 1k keys in 1—2 seconds.

You would need an RPC endpoint - a local node / RPC provider (eg Alchemy/Infura).

This UI shows a number of submitted, approved and valid keys for each Node Operator, along with all invalid keys in case there are any.

It is updated every 30 minutes via cron, but update period may change in the future.

If the new keys are present and valid, Node Operators can vote for increasing the key limit for the Node Operator.

It is urgent to notify Lido team and other Node Operators as soon as possible. For example, in the group chat.

Node Operators who run validators for Lido are required to set the fee recipient for the relevant validators to the protocol-managed LidoExecutionLayerRewardsVault which manages Execution Layer Rewards. This address differs depending on the network (Mainnet, testnet, etc.) and is not the same as the Withdrawal Credentials address.

This smart contract address can also be retrieved by querying the getELRewardsVault() method in the core stETH contract.

List of possible relays that have been approved by DAO can be fetched by querying the get_relays() method in MevBoostRelayAllowedList contract.